I was away from home last year for Christmas so it is even more enjoyable spending christmas at home this year with my parents. I arrived home on the 23rd and dinner was oxtail stew with mashed potato and swede (rutabaga) and spring cabbage. I haven’t had oxtail for a long time. It was banned for a couple of years during the BSE scare but now seems to be regaining popularity.

Something tells me that my parents were pleased to see me too. Here is the mash browning in the oven. 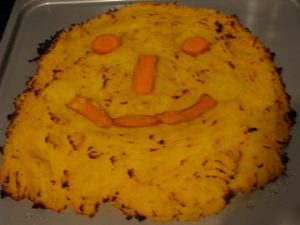 Christmas eve is my mother’s birthday and we started off the birthday celebrations with scrambled eggs and toast (my father makes all of his own bread) and gentlemen’s relish (anchovy paste) which we always have at christmas time. 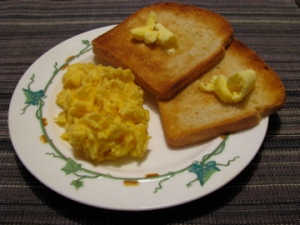 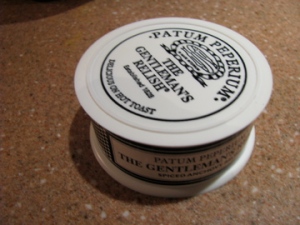 Every family has their christmas traditions and foods that you associate with the holidays. Other things that we always have around are clementines, lychees and nuts in their shell, this year walnuts and pecans. 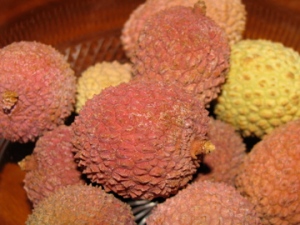 Not edible, but christmas crackers are also a must as well and of course the ubiquitous mince pies. 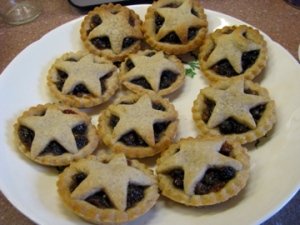 Lunch was a vibrant watercress soup with homemade foccacia. Yes, I know you shouldn’t play with your food! 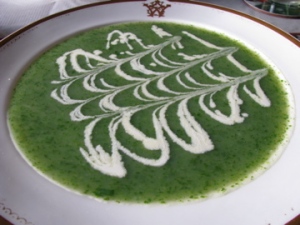 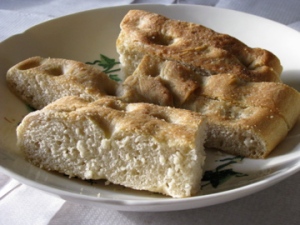 Christmas cake is another tradition and often takes the place of birthday cake – one of the perils of a christmas birthday. Every year the recipe is slightly different as my mother searches for the ‘perfect recipe’. She found it once (we think), but the next year couldn’t remember which recipe she had used, or just couldn’t find it. It is rich, fruity and usually alcoholic as it is made at least a month ahead and then fed with Spanish brandy until it leaves a slight puddle on the plate. It is covered as tradition dictates with a layer of marzipan and royal icing. 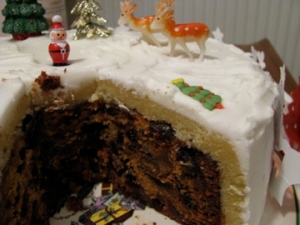 Birthday dinner started with homemade ravioli stuffed with a cheese and artichoke filling. 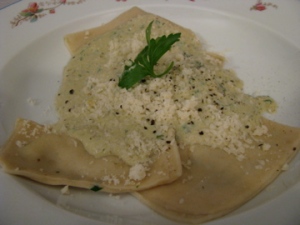 The main course was steak with a spelt risotto made with leftover oxtail stew and served with broccoli. 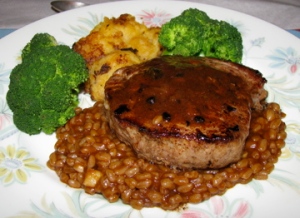 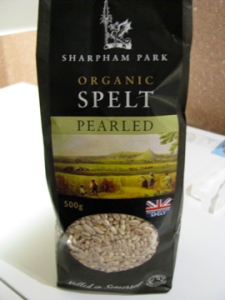 We finished the meal with some Christmas Pudding ice cream from Thaymar accompanied by some 1974 Rivesaltes dessert wine. 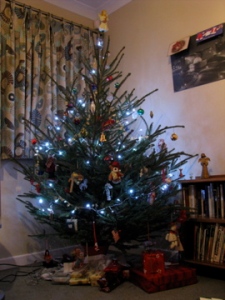 Christmas day itself started with a brunch of locally smoked trout with more of the delicious homemade foccacia, quails eggs and some very fine Spanish Cava. 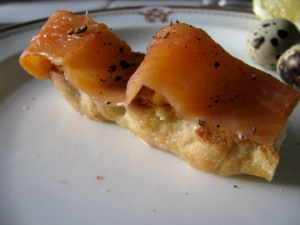 When we are at home for Christmas our dinner is usually the same. There is definitely something comforting about having familiar foods and it is a meal I look forward to all year. Although we are always tempted by magazine features about new an innovative ways with brussels sprouts and other sides, christmas comes but once and year and we generally revert to the old stalwarts. Roast turkey (this year a bronze turkey from Mellor’s), bread sauce, two stuffings, cranberry sauce, giblet gravy, brussels sprouts and duchess potatoes (mashed, piped and baked). 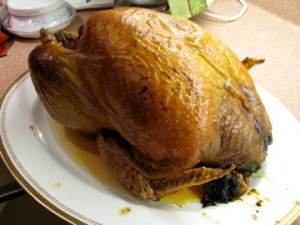 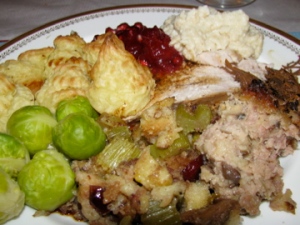 We usually have one stuffing that is a family favorite sausage meat stuffing and the other stuffing is variable. Some years wild rice, some years chestnut and some years bread based. This year was bread, celery, cranberry and orange juice. I have to admit I prefer the rice ones.

Obviously you have to guess on the seasoning, because you really don’t want to test the raw sausage meat!!

Fry onions and mushrooms in the butter without coloring. Mix in the bread crumbs, seasonings, water and grated rind. Allow to cool. Add to the sausage meat, stir in the beaten egg and mix well. Either stuff into the turkey or wrap in foil and cook with the turkey.

The happy chef enjoying the fruits of his labors. 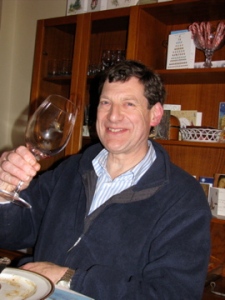 The finale of Christmas dinner is the pudding. Made to an old (and secret) family recipe and made years in advance. I’m not sure how old this year’s vintage was. Christmas puddings are often served flaming with brandy or whisky and a popular accompaniment for christmas pudding or mince pies is brandy butter. 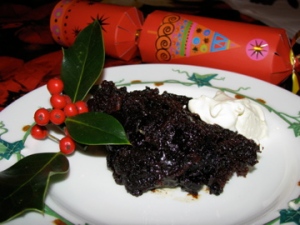 Of course, one of the best things about Christmas is leftovers. Boxing day was cold turkey with bubble and squeak. Bubble and squeak is usually made leftover mashed potato and cabbage, but it works just as well with brussels sprouts. Mix them together and fry until you get a nice golden brown crust. 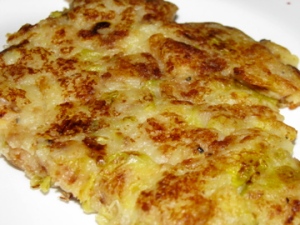 You probably won’t be surprised that I got quite a lot of foodie christmas presents. I am excited about trying the solid Venezuelan Black Cacao and reading ‘The man who ate the world’ by Jay Rayner. The zaramama popcorn that popped off the cob was fun and much better than the usual microwave popcorn. 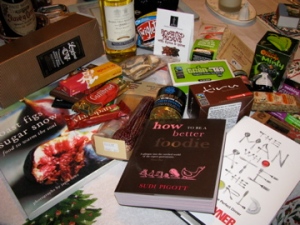