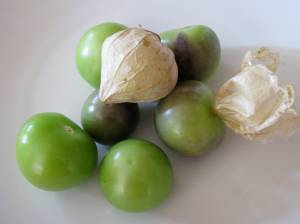 First a rant and then some recipes. I had a great trip but was still excited to come home and get back in my own kitchen. I got back on Wednesday evening (sadly not in time for the Upper Arlington farmers market) and decided to go to Wholefoods on the way home to get supplies to last me until the weekend. I was really disappointed to find that Wholefoods didn’t have a single item of local produce (at least not that I could spot). I really tried hard but the blueberries were from Canada, the peaches from Virginia and most of the other fruits and vegetables were from sunny California. It is shameful that even Krogers and Giant Eagle are doing a better job of stocking local fruits and vegetables. At this time of year it seems inexcusable not to have local produce, when the farmers markets show that there is such an abundance. I did (you will either be pleased or dismayed to hear) fill out a comment card after the bewildered check-out clerk was subjected to my tirade in response to his inquiry  ‘did you find everything you were looking for’.

Friday I had my first and long overdue trip to the Clintonville community market which is tucked away in a residential street, well off the beaten path. I bought a few interesting things, like puffed multi grains, molasses and some vegetable orzo and stocked up on lara bars (who I just noticed supported the US Olympic rowing team). It is a great store and I was amazed how much variety they stocked in what seems from outside quite a small space. I will definitely go back, especially as they open late.

Saturday was finally farmers market day….. but I had signed up to do an event called bike the cbus which started around 8am. I was hoping that the farmers market would still be open in the afternoon. Frustratingly we biked past the North Market at least twice on the route and although sorely tempted, I resisted making a diversion. This was the inaugural bike the cbus and it was a 30 mile urban bike ride exploring different neighborhoods of the city and making some stops en route, for example to look at a newly built LEED house.

I finally made it to the North Market around lunchtime and was relieved to see that there was still plenty of fruits and vegetables, although sadly no eggs. This week’s haul included chili and sweet peppers, seedless grapes, blackberries, tomatillos, new potatoes, plum tomatoes, apples, corn, green beans, ground cherries, peaches, three colors of patty pan squash, cilantro and a baby watermelon. It was fun to see the difference in what was in season from three weeks previously.  I was sad that blueberries seem to be over but there were compensations. The grapes were really fragrant and so different to the grocery store standard ones. The blackberries were huge and juicy and ground cherries are such a great snack and keep really well.

One of the things I saw but didn’t buy at the Toad Hill Farm stall was a green leaf called lambs quarters. It looked a bit wilted so I didn’t buy any, but looked it up when I got home and discovered that it is another name for the weed fat hen that has gotten Anthony Worrell Thompson into so much trouble recently. It even made the news over here.  Actually, I think I saw some growing on the way back from the park today, but I wasn’t sure enough to risk foraging!

Here are some of the things that I made with all of my wonderful ingredients:

This was based on a recipe from the Flexitarian Table by Peter Berley, but I inadvertently changed the proportions of squash to tomatoes. I made it with four different zucchini/ summer squash. It is seasoned with mint, which I wouldn’t have thought of and some fresh chili and was really good cold a couple of days later.

I did quite a bit of research on tomatillo recipes as my previous version had involved baking the tomatillos and I couldn’t face using the oven when it was so hot. You can also broil them, or use them fresh which is what I decided upon. I was really happy with the result, it was really easy and very tasty and a healthy dip for crudities or chips. I have been eating it was avocado as well. Here is the approximate recipe:

1/2lb of tomatillos with the papery skin removed.
1/2 yellow onion
1 -2 peppers (mine were small and somewhere between red and green and sweet but not too sweet)
2 small chilis with the seeds removed
1-2 cloves of garlic
a handful of cilantro
1 tbsp olive oil
a squeeze or two of lime
pinch of salt
a tsp of sugar.

Put all the ingredients in the food processor, whizz, taste, adjust seasoning, whizz, chill and serve 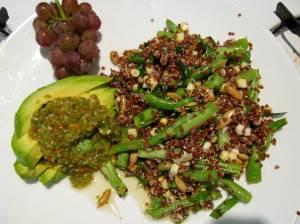 The Quinoa salad recipe also comes from the Flexitarian Table  and I LOVE it. I think that I like the red quinoa even more than the usual variety. I might try mixing them next time – I can’t resist those little curls. Peter Berley also includes cherry tomatoes in the recipe, which I didn’t because it was before my tomato epiphany. Tomatoes would make it more colorful but I don’t know if it would keep as well. The ingredients are blanched green beans, shucked corn (which he blanches and I use raw), red quinoa, fresh parsley and chives and toasted pumpkin seeds (worth the extra effort). The dressing is just olive oil and lemon juice. It makes a fantastic packed lunch, crunchy, fresh tasting and it travels well.

A proud moment, both the tomatoes and the basil came from my garden. Soon I should have some lettuce too. It’s true I really am eating tomatoes!

Could easily be turned into more of a salad nicoise with tuna, anchovies, hard cooked eggs or tomatoes.