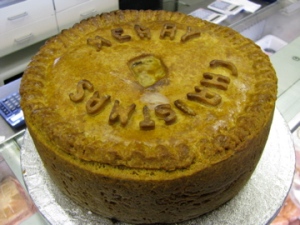 My parents have a house in North Nottinghamshire, near the market town of Retford (pop 21,000). This is Robin Hood country, with what remains of Sherwood Forest nearby (not much!) and it is also the area that the Pilgrim fathers originally hailed from. There are a couple of coal mines in the area (a lot less than there used to be) but it is mostly rural with mixed use agricultural land. There is also a large national trust property Clumber Park.

Two of our favorite food purveyors are found in nearby villages. Thaymar ice cream located at Haughton Park Farm near Bothamsall and Mellor’s Butcher in Milton. Both are easily accessible from the A1. 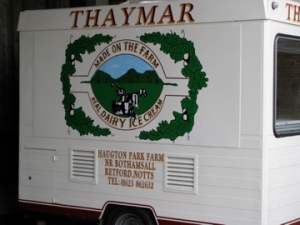 We have been loyal customers of Thaymar since they started making ice cream in 1988. It is wonderful to see how the business has grown over the last 20 years and they now have a thriving tea room in its (at least) third expansion. They are a wonderful family and you can read more about their story here. As I teenager I remember helping out scooping ice cream at a couple of special events.

The ice cream is made right on the farm and they now make over 30 flavors. They have a wide range of interesting flavors (elderflower and gooseberry, rhubarb and ginger crumble). On my recent trip I noticed Gin and Tonic sorbet and tried a delicious apple and cinnamon ice cream. Some of my favorite flavors are coconut, honey and ginger and gaelic coffee, and the christmas pudding is a family favorite. They also sell a lot of gourmet food items, farm fresh eggs and some vegetables. 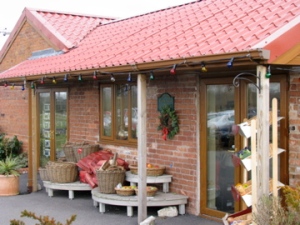 Another much loved food purveyor is Peter Mellor, award winning butcher, sausage and pork pie maker who runs Mellor’s farm shop in Milton. The beef is excellent and I love Mellor’s thick cut english smoked bacon. Some of the sausages are named after Robin Hood characters; Friar Tuck and Will Scarlet but our family favorite is the farmhouse pork. Mellor’s were doing a bustling trade on Christmas eve with lots of people collecting turkeys and they were almost sold out of sausages.

Retford has a thriving market, but sadly most of the stall holders were taking a break after Christmas. There were a few stalls open on Christmas eve, a couple of fishmongers, one veg stall and a cheese & pork pie stall, run by Robert Lockwood from Melton Mowbray. As well as a fine array of Stilton (very popular for christmas) and some excellent looking pies and pasty, Mr Lockwood sells a wide range of Windyridge Cheeses. Windyridge is a Somerset company making handmade flavored cheddars. Normally I am a bit of a purist, but I have been won over by their whisky and ginger cheddar, which is my current addiction. I also enjoyed their chilli wack (smoked cheddar with chilli peppers) and the Landlord’s choice with ale and mustard seeds. I also noticed a cheddar with marmite. I was wary of the cinnamon cheddar with apple, but apparently it has been a big seller this christmas. Windyridge make over 40 different flavors of cheeses and I would definitely be curious to try some of the more unusual ones.

Bakeries in England generally sell a mixture of hot and cold items and these will vary depending on the region. Loafs of bread and bread rolls usually line the walls, there is a hot section with sausage rolls and pies and pasties. Dounuts are generally only jam filled and there are iced buns and then a variety of cakes and pastries. Teacakes, scones, hot cross buns, fruit buns, gingerbread men and custard tarts are also common. There may be cakes such as sponge cakes, battenburg cakes  and fruit cakes and cream filled eclairs.

Bacon’s is a Retford food institution and you can almost imagine yourself stepping back in time. It is always bustling and has a very high turnover, it always amazes me how many staff they have on a busy saturday morning. It is a large shop, a happy marriage of butcher on one side, baker on the other and with offspring pork pies and other meat filled baked goods. Bacon’s is a great place to buy local lamb as they can always tell you exactly which farm it came from. 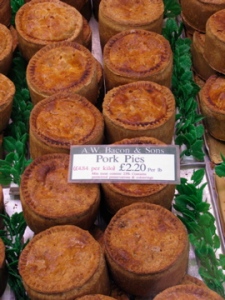 As you can see, pork pies are popular in this part of the world. Another local meat product is haslet, a herbed pork meatloaf, sliced and served as a lunch meat.