I am so behind and have so much to write about that I have no idea where to start. What a week. On Sunday afternoon we were hit by the tail end of hurricane Ike. This manifested itself as a windstorm with gusts up to 78 mph. So many trees and electricity poles came down that  700,000 thousand people in Franklin county lost power. My power came back on wednesday night, went again on thursday for a few hours but came back later that day. It is amazing how much you take electricity for granted and how many things you rely on it for. Luckily I have a gas stove and hot water and enjoy camping, so armed with my trusty head torch, I managed pretty well and even quite enjoyed it, but I did miss home wireless and NPR.

As is the windstorm and pre-season (6.45am practice every day) didn’t make for a busy enough week – I went out every evening last week.

Sunday – OEFFA dinner take 1. Cancelled due to the power outage, but substituted with wine and impromptu appetizers at Tad and Sarah’s and a walk around Worthington to look at some of the damage.

Conjured up by candlelight.

Monday – OEFFA dinner take 2, transplanted to the sumptuous Columbus Athletic Club. A seperate post on that will follow.

Tuesday – Real you incorporated event at the Wexner and a look around the Warhol exhibition. Liz Lessner and Jeni Britton were part of the panel discussion and as a fan of both of their businesses it was fascinating to hear how they got started and more about their business philosophies.

Wednesday – Use it or lose it pot luck dinner at Bear and Colleen’s. A response to the continuing power outage. We luckily had power for the dinner, but it was an excuse to use up things that had not survived in the fridge or freezer. It turned into an incredible feast with venison and bear meat, fresh local produce, curds and whey cheeses, smoked salmon and pistacia vera macaroons. 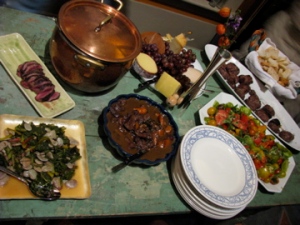 The use it or lose it feast

Thursday – Green Drinks at Barley’s and dinner at Bono to go.

Bono to go at the Eleni Christina bakery

Saturday – my weekly trip to the farmers market and the pièce de résistance – the Shake the hand that feeds you locavore dinner at the Flying J farm, organized by  Slow Food Columbus . 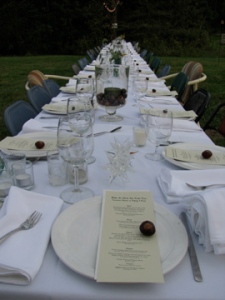 Sunday – brunch at Sage and my new hang over remedy – a salty caramel ice cream sandwich from Jeni’s.

As you can tell, there is a lot more to say on most of these things….. watch this space.