I had amazing gnocchi at Lisa’s October dinner, made by Chef Seth Warren. Since then I have ordered gnocchi at several restaurants in the hope of being similarly enraptured. Sadly, each time I have been disappointed and the gnocchi were not sufficiently different to the supermarket variety.

Leafing through Simon Hopkinson’s ‘Second Helpings of Roast Chicken’ last week, I discovered that I had all of the ingredients I needed to make my own. I love it when that happens, it seems pre-destined that you should try the recipe, and so it was that I embarked on another pumpkin labor of love. 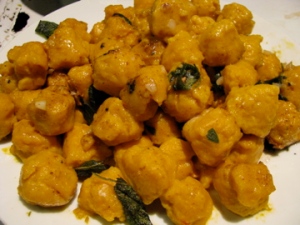 The recipe requires a couple of hours of preparation as you have to roast the pumpkin, then leave it in the oven to dry out and then dry it out even more with a tea towel (or two). Prepare to be amazed at how much water pumpkin contains.

Simon Hopkinson’s recipe is time consuming, the the ingredients are simple. Pumpkin, potato, flour and parmesan and amaretti biscuits (I actually used a finely ground biscotti). I have seen other recipes that use egg and the proportion of pumpkin to potato seems to vary. Some recipes use canned pumpkin (surely too wet?) and others use no potato at all. Simon Hopkinson uses steamed potatoes but I believe that it is common to use baked potatoes to reduce the moisture even more. Given that you are already using the oven to roast the squash this would be a good idea and saves peeling the potatoes.

Next time I would make the gnocchi smaller – I think I was losing patience by the end and they were definitely larger than advocated in the recipe. They are served with sage butter and garlic and were then liberally sprinkled with parmesan.

I had some friends around for dinner as gnocchi guinea pigs and to help finish off the thanksgiving cheese and crackers.

I also made a bean soup from 101cookbooks. It is also in Heidi’s book ‘Super Natural Cooking’. The recipe calls for baby lima beans but I used half horticulture beans from the north market and chickpeas as I only had half a pound of the beans. It was really easy and delicious, a great winter warmer. The recipe calls for dried beans (I soaked them in advance), a head of garlic, water, salt, oil, an onion and some chipotle peppers in adobo sauce which I bought from our local Mexican Grocery store. The smokiness of the chipotles made the soup taste like it had bacon in it. 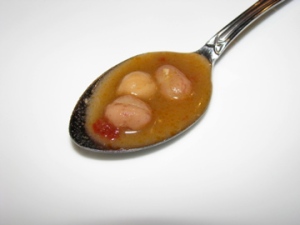 Dessert was a home-made cherry sorbet made from a bottle of knudsen’s tart cherry juice that I bought on sale. I added some simple syrup infused with cinnamon and a little amaretto and some extra water. We served it with Ugandan vanilla ice cream from Jeni’s which was a perfect accompaniment. 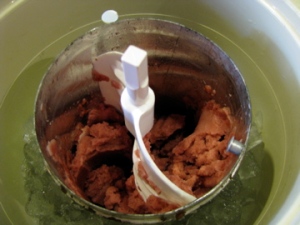 The evening was rounded off with some hot buttered rum – another great winter warmer. Brown sugar, spices, butter and dark rum. It was reminiscent of mince pies with rum butter. Festive and delicious.