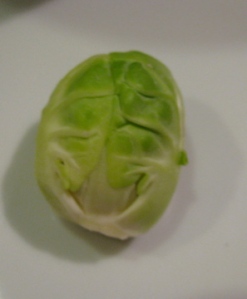 I love it when you realize that you have all the ingredients that you need for a recipe. In this case it was another Peter Berley recipe from Fresh Food Fast. I am a big fan of brussels sprouts and usually just eat them plain with some butter, salt and pepper. I don’t generally feel the need to disguise or adulterate them as I love their fresh, green, crispness. This recipe was intriguing as I never would have thought to use caraway and soy sauce together and I haven’t used Quinoa for a while. It would be a great meal if you have to feed a hungry vegan and has lots of protein. Apart from the time taken trimming the brussels (which you can do in front of the TV) it is very easy.

The tempeh was fresh from Toad Hill and is so superior to the supermarket versions that I am trying to persuade the Greener Grocer to stock it. 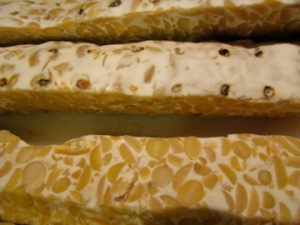 Prepare the quinoa, according to the instructions on the packet, then set aside and keep covered. Fluff before serving. It usually takes about 15 minutes.

To toast the almonds, place them on a rimmed baking sheet in a single layer and bake at 350°F, tossing once for 8-10 minutes until fragrant.

In a large sauté pan warm the oil over a medium heat. Add the onion, caraway seeds (if using) and sauté for 2 minutes. Raise the heat and add the tempeh and peppers. Cook, stirring occasionally, until the tempeh begins to caramelize, about 2 minutes. Add the brussels sprouts, 1 cup of water, the soy sauce and mirin and bring to the boil. Reduce the heat and simmer, covered for about 10 minutes. Season with salt and pepper to taste. Serve over the quinoa, sprinkled with toasted almonds and accompanied by lemon wedges. 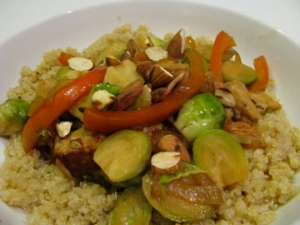 Here are some other Peter Berley recipes (a locavore’s holiday table) and writings. And a gratuitous photo of baby butternut’s second blossom. 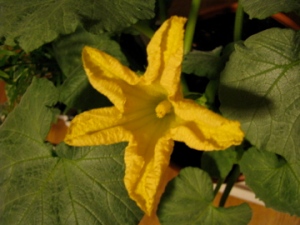 One Comment to “Quinoa with brussels sprouts, tempeh and toasted almonds”