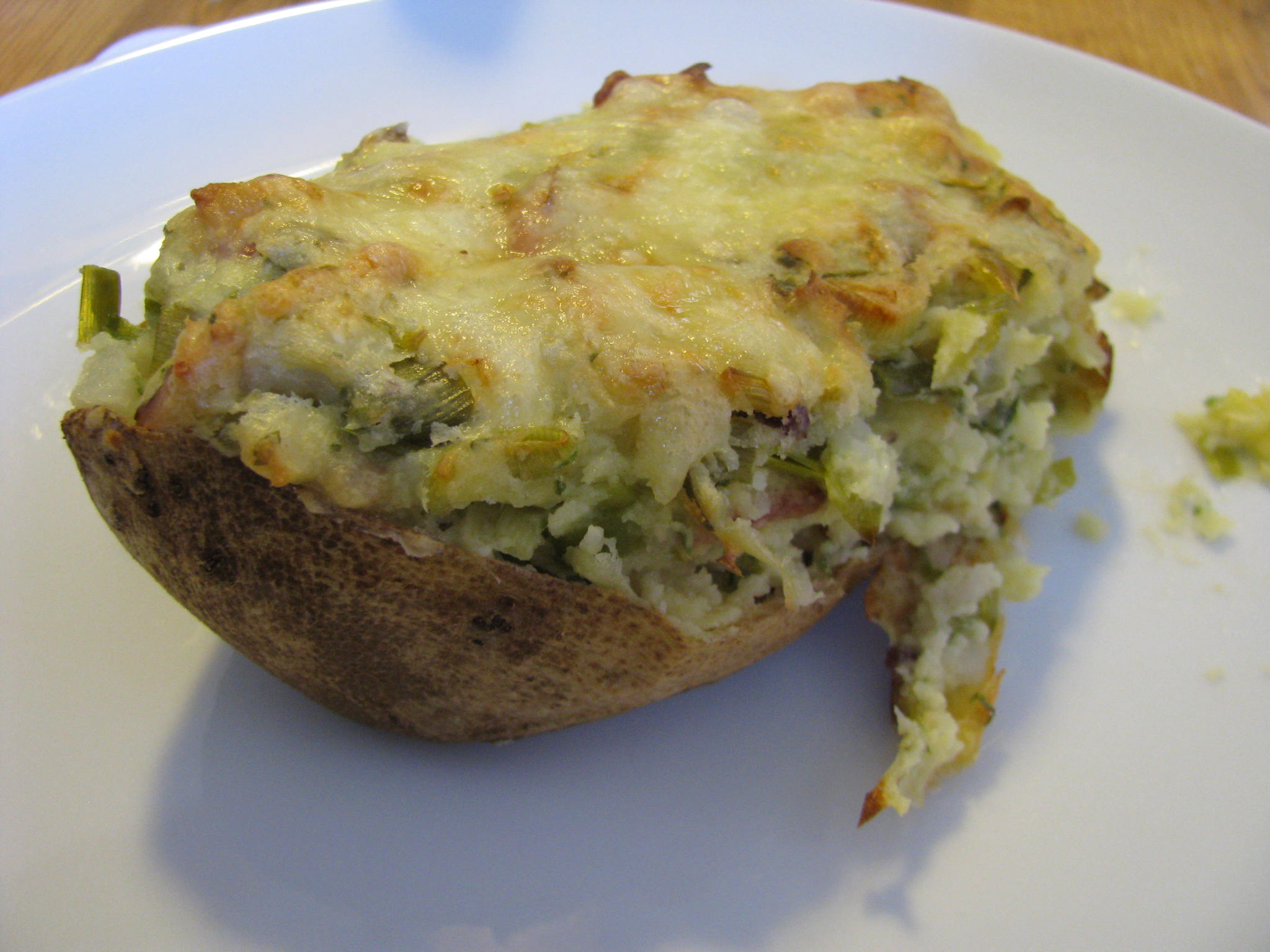 Yesterday I was going to make a Leek cheese and bacon tart from the October issue of BBC Good Food magazine. I thought it would be a perfect use for my Wayward Seed Farm leeks and some Heini’s lacey baby Swiss cheese that AD’s mom gave us on Sunday. Unfortunately poor planning (or more accurately procrastination) got the better of me and when I went to the grocery store at the last possible moment to buy the puff pastry, all they had were vol-au-vent shells. Perhaps I should be more ambitious and try making my own puff pastry, but that’s a project for another day.

I bought some of the puff pastry shells thinking that I might be able to improvise but after failing to find any recipe in my quick search that didn’t call for Campbell’s soup, and fearing disaster, I grumpily gave up.

Today I remembered Nigel Slater’s latest article about baked potatoes and inspiration struck. I could use all of the topping ingredients for the tart and make a stuffed baked potato. Thank you Nigel!

2 large baking potatoes, scrubbed and pricked with a fork
1lb of leeks trimmed, washed and thinly sliced.
6 rashers of smoked bacon + the bacon fat
150g cream cheese mixed with chives, parsley and garlic
200g approx grated Swiss cheese
1 egg beaten (Nigel called for just the white so save the yolk if you want)
salt and pepper

The recipe called for a garlic and herb cream cheese. I decided to make my own based on what I had in the fridge. I mixed half chevre (soft goats cheese) from Lake Erie Creamery, half Philadelphia cream cheese and added crushed garlic and finely chopped parsley and chives. We ate some of it on crackers and it was really good. Worth making just for that. For the potatoes, I would probably use all cream cheese but still add my own garlic and herbs.

Bake the potatoes for an hour at 400ºF and then slice in half lengthwise and scoop out the flesh.
Snip the bacon into small cubes and fry until crisp. Remove the bacon with a slotted spoon and saute the leek in the bacon fat. Cook the leeks until they are soft (about 5 minutes).
Mash the potato flesh in a large bowl and then add the cream cheese mixture, bacon, leeks and bacon fat, half the grated cheese and the beaten egg.
Season to taste. Fill the potato skins with the mixture and place into an oven proof dish. Sprinkle the remaining Swiss cheese on top.
Bake for 20 minutes at  400ºF until the cheese is golden brown.

Now I have vol-au-vent shells to use up – any good ideas? … maybe I will wait for the next oyster mushroom crop.