The love affair with Details continues….. especially now they have $5 (for 3) tuna tar tar tacos on tuesdays and $3 wings on wednesdays! My current favorite is the Old Fashioned sandwich, made with smoked pastrami beef brisket, sauerkraut, rye toast and dijonaise sauce. As you can see I am still working through the menu. 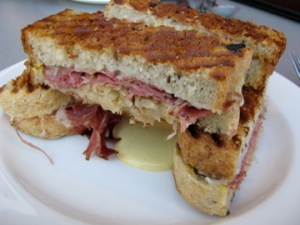 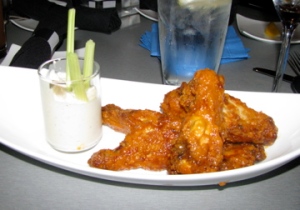 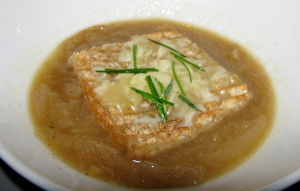 ‘Valentine’s’ was a feast of a weekend, with another round of taco truckin (mulitas and horchata – mmmm). Highlights were:

Wonderful sushi and Sashimi at Kikyo, where the sushi chef is quite the comedian (Prepare to be entertained if you sit at the sushi bar); The white tuna was a particular hit, miso fluke and another fish, that, stupidly, I can’t remember.

Cheeses from Katzinger’s of which Humboldt Fog proved to be the favorite.  Humboldt Fog is the signature cheese of Californian cheese company, Cypress Grove, who have a range of goat cheeses including one of my other favorites Purple Haze. Also pictured are the crumbly aged Montgomery Cheddar, Australian Roaring Forties Blue and an 8-year old aged Gouda, whose purchase was inspired by last week’s Pistacia Vera tasting. Blue cheeses go so well on digestive biscuits. If you haven’t tried that combination I highly recommend it. 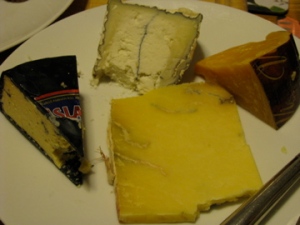 The most anticipated treat of the weekend was salumi from Salumi Artisan Cured Meats in Seattle, which is run by Mario Batali’s father Armandino and can be mail ordered. 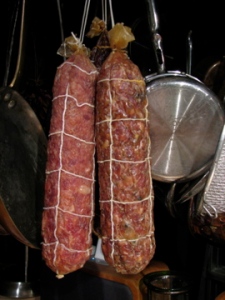 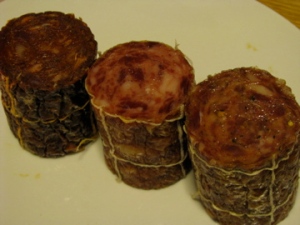 The three varieties pictured above are the salumi salami (house salami with a touch of ginger), the finocchiona (cracked fennel, black pepper, and a touch of curry), and móle (chocolate, cinnamon, ancho, and chipotle). I apologize for the poor lighting. All three were wonderful in their own way and picking a favorite was hard, especially as I am sucker for ginger, black pepper and móle. Many, many thank yous to BB & AD.

Sunday brunch was home made buckwheat blueberry pancakes with the remains of last summer’s blueberries from the freezer with amazing Thurn’s bacon and with lashings of maple syrup. 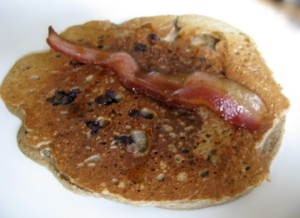 Dinner was Rancher Pie – a hungrywoolf original (?!) a riff on shepherd’s pie made with ground venison and buffalo. The venison was a kind gift from CMH Gourmand, who will be glad to know that it passed his test –  it was even better as left-overs (pictured below) the next day. 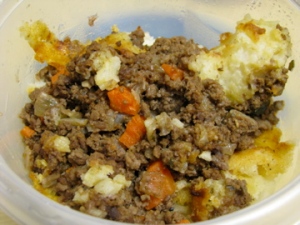