May marks the return of the farmers markets and I am so glad to have them back. Last year I was a North Market devotee and while it is still my nearest and dearest, this year I have decided to branch out and explore some of the other farmers markets that Columbus and Ohio have to offer. I have written several times before about why I love shopping at farmers markets. Suffice to say it makes me happy and whilst part of me wishes I lived somewhere with outdoor markets all year round, I think the seasonality makes me appreciate the markets even more.

My first market trip of the year was to the North Market and it was wonderful to see the familiar faces and all of their beautiful produce. Whilst the market was much smaller than it will be at the height of summer, many of my favorite stall holders were there including the Rhoades’, Elizabeth Telling, Toad Hill Farm and Blue Jacket Dairy. Blue Jacket have some new cheeses this year including a feta, Ludlow and the dessert like mountain mist quark with cinnamon and cranberries.

May is not the most bountiful month but there are some delights to be found. The early birds at the North Market were even rewarded with local morels but sadly I was not one of them. Our Ohio has a handy reference guide of what is in season when.

My staples this month have been asparagus, rhubarb, strawberries and beautiful young salad greens. We have mainly been grilling the asparagus, marinated in some olive oil and lemon juice with salt and pepper. The rhubarb I make into a compote and eat by itself or with yoghurt. My love of radishes has not abated and I pounced on them and also on some freshly picked English peas in the pod. There are lots of herbs, cut and in pots, flowers (including irises and peonies), praying mantis nests (for natural pest control), mushrooms, cheese and eggs. The curled cress was amazingly potent – the flavor is reminiscent of nasturtium flowers but fluffy and delicate though it appears it packs a punch like wasabi.

It is fun when you see something for sale in the market and realize that you have it at home in your garden – I have been experimenting with garlic scapes and chive blossoms. The chive blossoms are beautiful and can be tossed into a salad or as pictured used in an omelette. My weeding has taken on a new dimension since I discovered that what I thought was clover is actually yellow wood sorrel and it tastes like granny smith peel – yum!

The second market I have been visiting regularly is the Pearl Market in downtown Columbus. It is open on Tuesday and Friday lunchtimes and is surprisingly large and varied. It has been operating downtown since 1992. You can get some lunch, do some shopping and if nothing in the market appeals to you, it is a great excuse to go to El Arepazo Latin Grill for some wonderful Venezuelan food. There are some prepared food stalls (the highlight so far is Nellie’s samosas), baked goods, some sweet treats (try Jimmie’s old fashioned nut brittle), ice cream, cheese, crafts and clothes, plants and farm produce. The crowds of office workers grabbing lunch and some fresh air make it a decidedly different vibe to saturday mornings at the North Market. 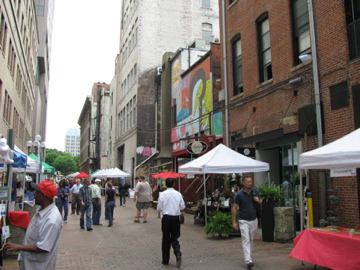 Having spent months tracking taco trucks, it is probably not surprising that any mobile food vendor catches my eye. Red Snapper a Jamaican food truck is a regular at Pearl market and on other days can be found on Cleveland Avenue. We tried the brown stew with rice, beans and cabbage and it was tasty and good value. I want to go back and try the jerk chicken which seems to be their most popular dish. The owners have only operated the truck for a month or so, previously running a restaurant of the same name before deciding to go mobile. 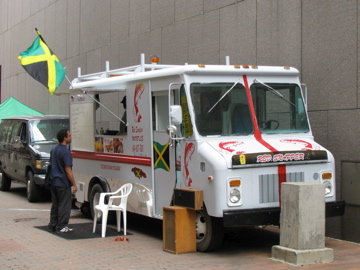 Yesterday I went on a road trip to Granville farmers market. Granville is an idyllic college town and you could easily be fooled into thinking you were in New England. It was the opening day of the farmers market and we were warmly welcomed. I think there were around 40 stalls and lots to choose from: lots of fruit and vegetables, meat, cheeses, breads, baked goods, honey, flowers and plants. It was probably a good thing that my imminent trip restricted my purchases. There were lots of samples on offer and some of the displays were really beautiful.

As well as some fruit and vegetables, I bought some of the tasty hot trail Bologna from Olde Village Meat (Frazeysburg); the most flavorful hamburger meat I have ever had from Long Meadows Grass Beef (Utica) and a french baguette from Lucky Cat Farm (Pataskala) and I couldn’t resist a walnut cinnamon roll for breakfast.

I had heard about the Granville farmers market because it is the main market for Dick Jensen of Flying J farm (where we had the shake the hand that feeds you dinner) and also Janelle Baron of Blue Owl Hollow (where we went to the mushroom log workshop). I saw Dick (and bought some maple syrup) and Janelle and her husband Peter who had a fragrant and fascinating array of herbs including five varieties of mint. I hadn’t seen curly mint before and Janelle gave me samples of all five to compare. 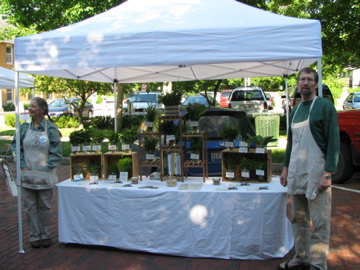 Normally Janelle and Peter have some of their baked goods to show people what they can do with some of the more unusual herbs. Having sampled their fantastic food at the mushroom workshop, it would be worth another trip to Granville just for that.

We were told that Granville will also be having a smaller market on Tuesday afternoons during the summer. I can’t find any details online but if you are looking for farmers markets, farms or CSAs close to you, Local Harvest is a great resource.

← Chili Cocktail Creations
In the Month of Mayw →