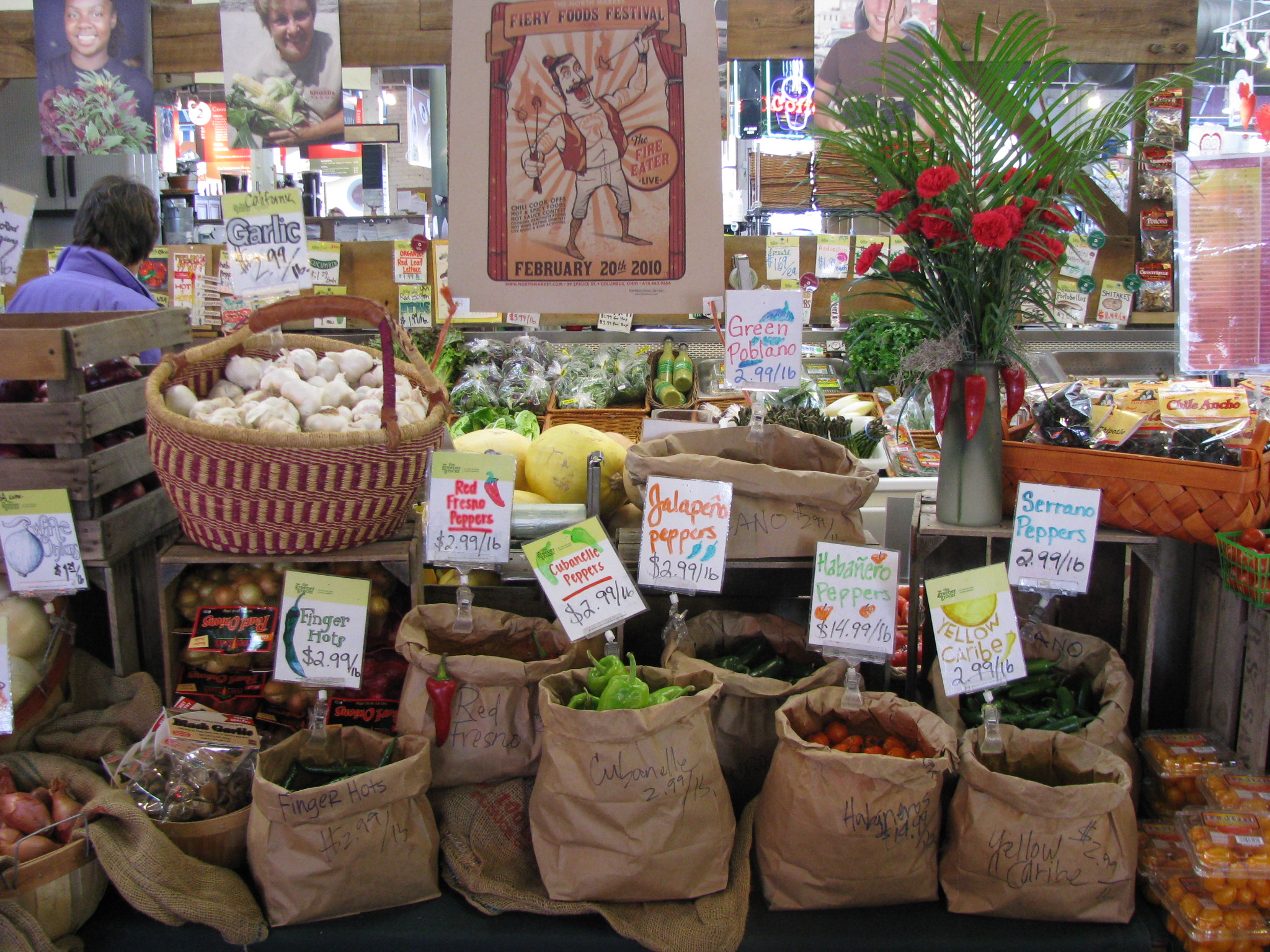 The Fiery Foods Festival is a fun North Market event with competitions for chefs, amateur cooks and crazy people who want to see how many hot peppers they can eat. Appropriately held in one of the coldest months of the year, the Fiery Foods Festival is definitely a winter warmer. Many of the vendors get into the spirit promoting their existing spicy products or creating something for the occasion. The Greener Grocer had an amazing array of peppers, Taste of Belgium had shrimp and grits waffles and Jeni’s were highlighting their spicy ice creams.

For children there was face painting, sombreros and maracas and the lovely Ms Kelley sporting a hot pepper costume and handing out chili shaped cookies from Mozart’s Bakery.

Upstairs there was so much chili in the air it was enough to make your eyes water. I had been asked to judge the Chef’s chili competition and was in the esteemed company of Johnny Di Loretto (Fox 28), G.A. Benton (Alive) and Miriam Bowers Abbott (The Other Paper). When I saw the line up of Chefs entered I knew it would be competitive event. We tasted 15 chilis at a furious pace and judged them on aroma, flavor, texture and an overall score. By the end with faces glowing and beads of sweat on our foreheads, one might have thought we had just worked out.

Unsurprisingly there were a lot of strong contenders and also a lot of variety in seasoning – one strong on texas barbecue, one very cinnamon-scented, one Italian chili and several paired with a mini cornbread. At the judges’ table we could not hear the announcements and played an interesting game of  ‘guess who’s? [I don’t think we did very well]. You can see the full list of entrants and read about the other competitions here.

Second place went to a pork and white bean green chili soup made by Michael Ciotlola, now retired but formerly chef at La Scala and Luce. His chili, while perhaps not the most traditional, was extremely fragrant and flavorful and tasted like Mexico in a bowl with lots of tomatillo, corn and cilantro.

The winning chili was the last one we tasted. It was presented with a taste of marshmallowy Mexican hot chocolate which was a welcome treat after 15 samples of chili.

The final chili was made by Reymundo Rico from Cafe Corner and he had spent the previous week perfecting his recipe. His “pazoli” chili was a great blend of moderately spicy chili with an undertone of mellow corn. The ingredients included slow-roasted, garlic-rubbed pork, cilantro, red pepper, sea salt and pork sausage basked in a “pazoli sauce” made with guajilla and ancho chilies, roasted purple tomatoes, roasted garlic, red onions, hominy, kidney and black beans. It is currently on the menu at Cafe Corner so I recommend that you stop by and try it for yourself. Who knows, maybe he’ll be wearing his robe!

← The Raw and The Cooked: Ghetto Sous-Vide
Spring in your step? →