I have written about a couple of the North Market cooking classes I attended in February but so far I have not mentioned the two Dine Originals Chef Series classes. I was privileged to attend classes taught by James Beard Award nominee Kent Rigsby of Rigsby’s Kitchen and one of my favorite chef’s in the city Alana Shock of Alana’s. As well as tasting some delicious food I always come away with new recipes and learn things about ingredients and techniques. Alana demonstrated braised lamb, tapenades and how to chop apples. She also taught us about such exotic ingredients as tamarind paste, zatar seasoning, dried and preserved lemons. Kent taught us chicken cacciatora, deconstructed tiramisu and the Bibb lettuce salad with parmesan dressing and parmesan chips that was on Rigby’s Dine Originals week menu. [Warning: Parmesan chips are highly addictive. Knowing how to make them may not be good for your health or wallet].

Alana taught the class jointly with her wonderful pastry chef Devon Morgan. Devon taught us roux based chocolate souffles and lavosh crackers and was kind enough to allow me to share her lavosh recipe on Hungrywoolf. I have made crackers before, but I really like this recipe and the Kitchen Aid pasta attachment I got for my birthday made rolling them a lot easier.

Preheat over to 425ºF with a cast iron pan or old metal roasting dish on the bottom of the oven.

Place the flour, sugar and salt into a mixing bowl (ideally a Kitchen Aid mixing bowl) so you can use the dough hook. Add the softened (but not melted) butter and mix until the butter is mixed into the flour. Next add the egg, followed by the milk and olive oil. Mix until combined and then knead for a few minutes by hand. 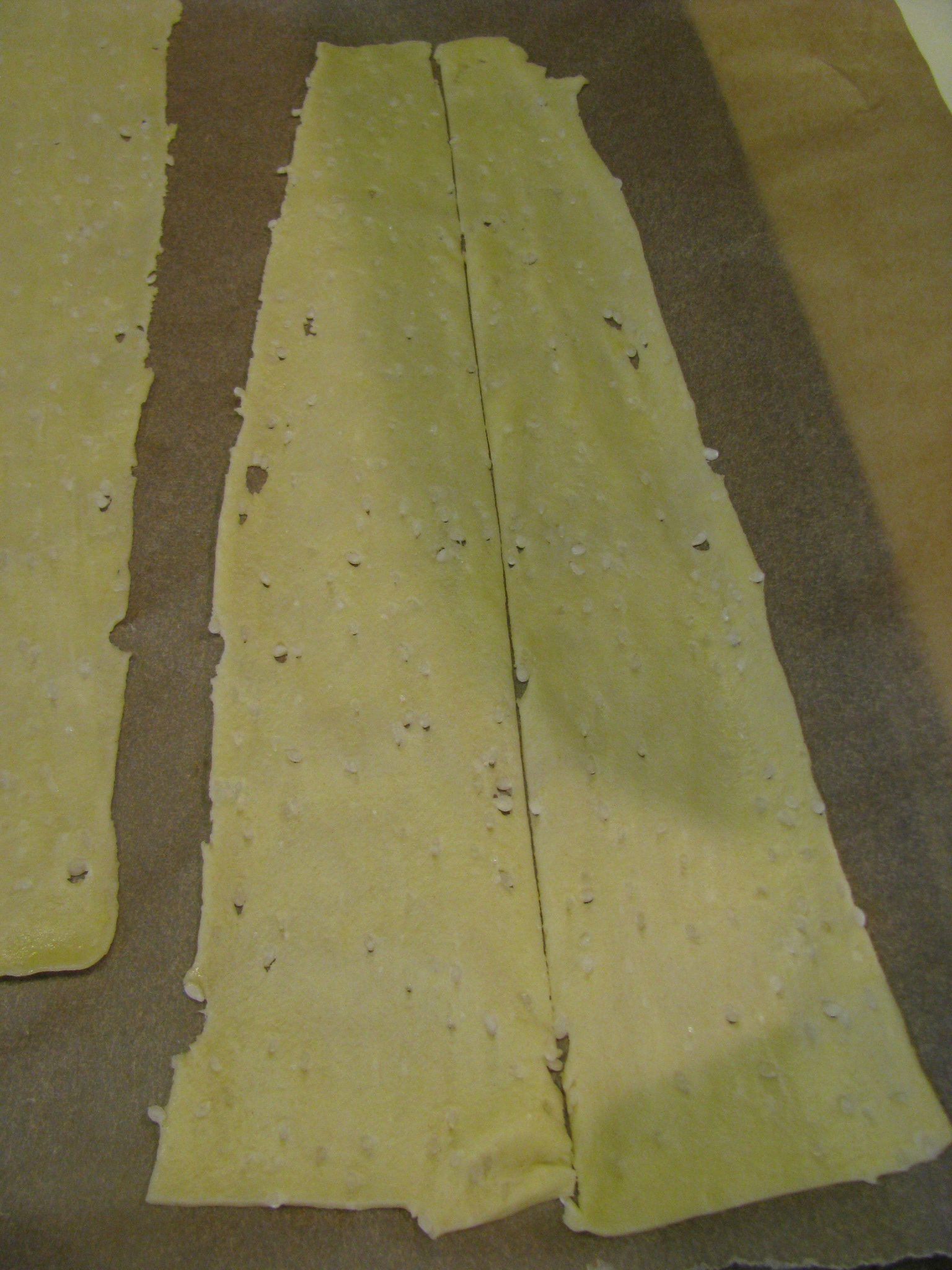 You can choose to put some seasoning into the dough, or to put it on top or both. I put a couple of tablespoons of sesame seeds into the dough and then experimented with some different seasonings on top (salt, za’atar mix and sesame seeds). You could also put flax seeds into the dough, but nothing too large or it makes it difficult to roll the crackers thin enough. If you are putting seasoning on top, you should brush the top with water or milk so the seasoning adheres better. I used a melting ice cube instead of a brush and it worked really well.

Divide the dough into small pieces and roll it through the pasta machine or by hand. With each piece, I rolled the dough through the widest setting on the roller a few times which seemed to improve the texture. I experimented with a couple of different thicknesses and found that no. 5 was optimal, any thinner and it started tearing and it was hard to handle. It is best to bake the crackers on a silicon mat or baking parchment and you don’t need to grease them. You can bake the crackers in large pieces and break them up afterwards or score them into smaller crackers before you bake them. I used a combination of a knife and scissors to score the crackers before I baked them. I think a pizza cutter would work well (and luckily I got a new one at the Pizza Grand Prix yesterday).

You may be wondering why I told you to put a cast iron pan in the bottom of the oven. Adding some steam to the oven helps to make the crackers crisp. I think Devon said she uses a wet towel, but one of my friends suggested throwing some ice cubes into a preheated cast iron skillet and I liked that method. Each time I put a new sheet of crackers into the oven I threw in a few more ice cubes. Devon advised us that you can’t really time the crackers – you just have to watch them and judge when the color is right. There is some trial and error there. You want to take them out when they have started to color, once they have started to brown they toast up pretty fast. I found the optimal timing in my oven was around 7-8 minutes.

One batch of dough makes A LOT of crackers as you can see from the pile above, and the picture at the top. That’s pretty much the whole batch with a few missing for taste-testing purposes. They’re great for a party and a lot cheaper than buying similar crackers. They are sturdy enough to dip into hummus or a similar dip and they went really well with the tapenades that Alana made. The crackers keep well in a sealed tupperware container.

← Possibly the best salad in the world
alt.eats.columbus →