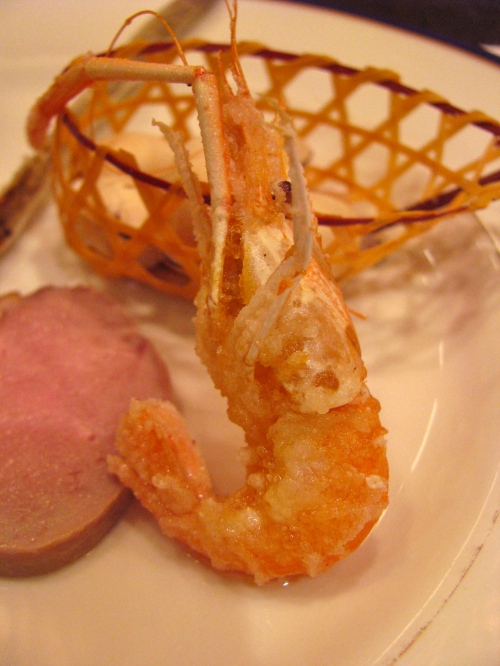 It was no secret, among many around town, that Anthony Bourdain came to Columbus last November, and it was no secret that he brought his camera crew with him.  Thanks to the efforts of a several local foodies with connections, Bourdain and crew were directed towards Kihachi and Clever Crow pizza.  From November on, we waited in anticipation for the viewing of Bourdain’ show, ‘No Reservations’, which finally aired last night.

The results?  The bit on Kihachi showed their chef, Michael Kimura, for the exceptional talent he is, and relayed the impression of two seasoned TV food personalities (Bourdain and Michael Ruhlman) made very happy by his creations. The ingenuity and passion of the man behind Clever Crow was communicated, for us, with great resonance. Each segment was a suitable tribute to each restaurant, and each will provide them with well-deserved attention.

With that said, in total, the segment on Columbus was not a credit to Bourdain’s franchise… and it was constructed so as to emphatically not be a credit to Columbus.

Why? The narrative was essentially as follows: Columbus is a wasteland of strip malls and chain restaurants (they showed plenty of footage of both). Isn’t it amazing – just entirely beyond all odds! – that there are a couple of guys fighting the good fight in such a godforsaken place!

It goes without saying, among those who actually have experienced the full Columbus food scene, that such a narrative is lazy, sloppy, and untrue.  And it is a shame that people such as Bourdain and Ruhlman, who are ostensibly committed to recognizing the excellence of places like Rigsby’s, Alana’s, and Dragonfly, are so casual about slandering them with such broad brush foolishness.

There are a few obvious reasons for this.  First, the nature of the show.  Did you see Bourdain anywhere in the Clever Crow bit? You did not.  Only his camera crew visited them, and he simply did a voice over based upon someone else’s observations.  The man was only in Columbus for an evening.  He knew nothing about us when he came here, and he knew little more than that upon leaving.

Such is the nature of show business… frustrating, but understandable, and I can forgive Bourdain for it.  He has a lot going on.

Much less forgivable was the appearance of No Reservations consultant and Cleveland native, Michael Ruhlman (shown dining with Bourdain in the Kihachi segment).  Bourdain, quite reasonably, relied on Ruhlman to provide background on our city.  And Ruhlman simply parroted every inane negative stereotype ever spoken of the city, on air, with remarkable economy.  ‘Strip malls’, ‘chain restaurants’, on and on…

What follows is pure comedy gold:

Twitter, being twitter, was atwitter with reactions to the show last night.  Ruhlman is also on twitter, and quite deservedly was on the receiving end of a lot of criticism.  This morning, he responded:

“@michaelcoyote et al, YIKES, I think I’ll have to watch the show! I don’t know Columbus well enough to have an actual opinion about it!”

Well, Mr. Ruhlman, it’s a shame that not having ‘an actual opinion’ didn’t stop you from expressing one.

If you’d like to see everything Mr. Ruhlman missed, please consider taking one of our many excellent culinary tours.