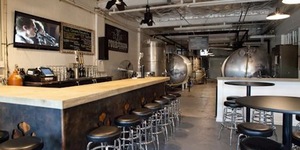 For the last four years, October has been a big month for Four String Brewing’s Dan Cochran. In October 2011, after months rehabbing an old machine shop, Four String was born just ahead of the Columbus Craft Beer Boom 2.0. In 2012, the space was taking shape with some retail customers including the BW-3 (Buffalo Wild Wings to you millennials) across the parking lot and some momentum. Cochran was working by day and brewing by night and picking up extra equipment where a small budget on a debit card would allow. In 2013, October was a double blessing. Changes in regulations allowed Cochran to open a bona fide taproom so that people drop in for a pint instead of a taste and a growler fill that felt like something clandestine. Cochran added a new baby Cochran to his team as well. Things were looking up and Cochran was fully invested in brewing full-time. As fall of October 2014 arrived Four String was committed to a big jump to partnering with a distributor and starting to can beer to get it to the masses. As canning became a weekly ritual (and rite of passage for many loyal volunteers) the cans took hold of a large market and a tipping point tipped.

This year, October is still a big deal for Four String. A new production brewery on the “near west side” is cranking out kegs, casks and cans, Cochran has or will soon add another baby to the brood, and the taproom is transformed after a few days of hard work (last week) has doubled in sized as a new space even long time regulars would not recognize. Things are looking good for Four String and as a business that literally started on a shoestring that is now a big deal. And because all of this is a big deal Four String is going all out with a four year anniversary party paired with Halloween and a BIG bottle release. The party is October 31st at the Taproom and it should be a doozy.

I won’t invest too much time writing about the bottle that is being paired with the party since it will probably be gone by the time you get there (and if you are not reading this before October 31st 2015, just skip the next paragraph). The Solo Series, has become a signature of the brewery and will be a selling point for the taproom, is a periodic release of limited number of small batch beers that you will never see again. This anniversary edition is an Imperial Stout aged in OYO (Middle West Spirits) Bourbon barrels. The ABV (alcohol by volume) comes in at 10.8% but tastes like at least a bourbon shot more. I was lucky to get an advance bottle to try. Leading tours on Saturdays is counter productive to getting solo series bottles or the traditional Saturday casks so this was a real treat for me and it will be for you (go early and take friends to get some).

OK, so all of this is well and good, a four year anniversary party, a bottle release and a lot of new-found elbow room to celebrate of this. But as they say at Commfest, this is a party with a purpose. While that might now be apparent, the purpose (I have proclaimed) is to remind Columbus Citizens that craft beer is a big deal in Columbus. That is cause to celebrate and Dan Cochran and his team worked their asses off to contribute to this growth – that deserves a tip of the hat and a raise of a pint glass.

There is a lot more to the story of Four String (if you want the full scoop – join Columbus Brew Adventures on the Grandview Brewery Tour or the pitchers and pizza tour) but I’ll stick to the bullet points. Cochran found a passion for home brewing while in college but he focused his energy on another passion – Rock and Roll. He played bass for a series of local bands including Big Back Forty and Feversmile. Not having a million dollars saved up as well as jumping into the craft beer pool just before it was filled, Cochran has to find another path to starting a brewery. He opted to create a Franken-Brewing system (a term he did not know until after he finished it). Collecting used dairy tanks as well as a tank from the local Marzetti plant, Brass Knuckle Pale Ale starting pouring our of those tanks instead of milk and ranch dressing. It took a lot of McGuyvering to make all of that work, but it did and it got Four String on the market ahead of the other upstart breweries in town and well…..the rest is history. Most of those original tanks have been removed and repurposed but the story still remains and some different tanks are coming back to the taproom to keep unique and one off beers pouring for the regulars that have come to call the taproom home.

October 31st is more than a bottle release and party at Four String, it is a celebration of a dream. Cheers to Four String we look forward to your 5 year anniversary.