When we started Columbus Food Adventures, it was a given that we’d do an alt.eats based tour – in no small part because we absolutely love to show off the surprising diversity of ethnic foods on offer in Columbus. That said, one tour can only show off so much (for now, anyway…), and we very often overhear, from people who participate in the tour, reminiscences about other great ethnic food experiences found in other cities.

And, very often, when we hear them talking we think, “You can get that here!”

So, without further delay, here’s our list of cuisines and other food experiences that many don’t recognize as being easily accessible in Columbus:

1) Thai – “Sure”, they say, “every city has Thai restaurants, but I’m talking about real Thai”. 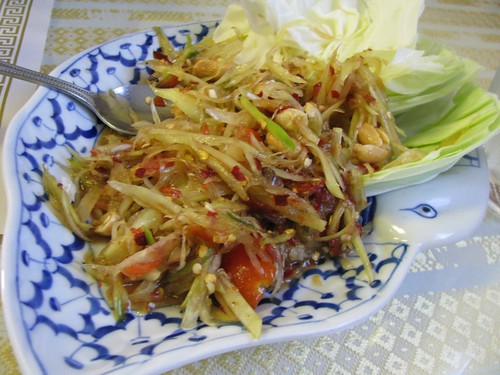 We wouldn’t have it any other way. Check out Bangkok for real-deal specialties from central Thailand, and Erawan (just down the street) for more Isaan-centric preparations. Also, Westgate Thai features straight-up mom & pop central Thai cooked by a lovely little lady who will effusively thank you for coming to her humble little restaurant as she melts your eyelashes off with furious spicy heat.

2) Dim Sum – Many who have gone to NY or San Francisco can recall a trip to a big hall where people with steam carts full of piping hot Chinese small plates roll up to your table and allow you to choose from their selection of delectables. In many ways, a dim sum brunch seems to often strike people as being a quintessential big city experience.

Which is exactly what you’ll find at Sunflower. Just like dim sum halls everywhere, it’s a frenetic and exciting experience. We’d recommend getting there no later than 11am on Sundays, as arriving at 11:05 may leave you without a seat for an hour or two.

3) ‘Good’ Japanese – This one comes as some surprise to us, but the queries keep coming. There’s quite a bit of good Japanese in town, but if we were to pick one spot we’d go with Kihachi. The chef gets his fish flown from Tokyo and/or Hawaii on a daily basis, so it’s often on your plate within 36 hours of being pulled from the ocean. Sushi’s not the main focus, though – there’ll be maybe 3 – 5 sushi options on the menu on any given day. Instead, Kihachi is the place for authentic, no-holds-barred Japanese small plates prepared at the highest level of quality.

If you’re celebrating a special occasion, give ’em 24 hours notice and ask for an omakase dinner. It’ll set you back around $100 per person, but it’ll be 9+ courses of some of the absolute best food Columbus has to offer.

4) I Want My Banh Mi! – Participants on our alt.eats tour know very well where our favorite Vietnamese banh mi sandwich can be found. Don’t hold it against us if we keep that location under our hats (we’d love to see you on the tour!), but solid Vietnamese cuisine of all descriptions can be found at Huong, Buckeye Pho, Indochine, Pho Saigon and Mi Li cafe.

5) Real Mexican – Transplants from the West and Southwest have grown accustomed to authentic Mexican food as an easily accessible part of their everyday lives. It’s not quite that easy in Columbus, but with over 35 taco trucks in town a good taco, burrito, or torta is never far away. Our taco truck tour (starting up again in April), covers what we think are some of the best.

But don’t take our word for it. We took Serious Eats taco connoisseur Kenji Alt-Lopez to the trucks on the tour, and he gushed that, “the worst taco I ate in Columbus was better than the best I’ve had in New York.’ No kidding. More recently, in Rachael Ray’s magazine, he pointed to Los Guachos as the taco truck serving the best taco in the midwest.

6) Regional Chinese – Not unlike Thai, there’s ‘Chinese’ (think General Tso’s chicken) and then there’s CHINESE. Our current infatuation is with the utterly authentic Szechuan flavors of Fortune – we recently rated it as the most underrated restaurant in Columbus, and our most recent trip there leads us to emphatically stand by that assessment. Ignore the front of the menu and skip to the Szechuan offerings on the back pages… you’ll be glad you did.

7) Pizza – We’re all kinds of fine with the Columbus-style pie – I’ll take one from Rubino’s, please – but we can understand how our tavern-cut crispy crust pizza may leave some transplants wanting. East Coasters yearning for the floppy fold-it-in-half pie wedge will, if a bevy of enthusiastic relocated NY/NJ folks are to be trusted, find exactly what they’re looking for at Brooklyn Pizza in Powell.

Fans of the blistered, wood fired Neapolitan style will be thrilled with both Harvest Pizza and Bono Pizza. And, if you’ve spent any time in Portland, you may have come across something like the delicious and hearty sourdough/cornmeal thick crust pizza offered by Clever Crow pizza in the North Market.

So that’s our take – we’d love to hear what you think we might have missed!

Note – the top photo is a still shot from a great video called ‘Rise and Shine’ by Zach Frankart. We’d recommend you check it out here.